A friend of mine is plagued with unwanted thoughts.

He’s been diagnosed with OCD (obsessive compulsive disorder) and I can tell how bad he is at any given moment by the number of times he calls me — he says I say the same stuff as his psychologist but I’m a lot cheaper! :-)

If I told you what they were you’d think it was silly but these silly thoughts dominate his life completely.

Roll up! Roll up!

My friend and I have the same conversation over and over…

“How do I get rid of these thoughts?”

“You have to not pay attention. There is only one method — distraction. Pay attention to something else.”

Sounds simple eh? It is simple! The question is — can you do it?

Say you’re walking through a fun-fair when one of the stall holders is giving you the hard sell. We’ve all been there. He’s in your face basically, but you know instinctively that any attention you give him will only make the problem worse. If you even look at him you know he just won’t leave you alone.

Some thoughts can be like that — they’re in your face, they urge you in the strongest possible way to act out a certain thing.

Thought becomes you… unless you watch

I was watching a video clip of Eckhart Tolle the other day… He said:

I remember too, a lecture by Alan Watts who drew a circle and asked his students what the circle was. Some said a ball, some said it was the sun and so on. They were all wrong… it was a hole! We don’t notice the background.

Thoughts and feelings can have amazing power. They suck your attention right in and you have no power to stop it. They suck you in so much that you no longer notice the field (you), only the content (thought/feeling).

That’s the problem my friend has. I’ve told him the solution to his problem a thousand times but he’s struggling to actually do it. His thoughts, backed by his belief have too much power.

And make no mistake; we’re talking a lot of power here. OCD = compulsive = no choice. We all have OCD to some extent. Little or no choice.

Thankfully, over time and with constant practice, things are getting better but it’s a tough road and progress is sure, but painfully slow.

In his case, a childhood trauma was the event that started all this mess. Traumatic events have amazing power to affect our unconscious minds and generate fear. This is a good thing.

If you’re walking though the jungle and get attacked by a lion, it’s this very same process that stops you repeating the same mistake again. You learn when to fear a lion attack and that is a good thing!

But if trauma is attached to insignificant events, then those insignificant events take on the fear that should be reserved for lion attacks. Say your parents always fought at the dinner table and caused you to be always in a state of anxiety at meals times, then food would become something to fear, by association.

This initial cause can then be strengthened over the years by your attention until life-stopping phobias can result. Now we have a deep problem that’s really hard to shift.

Still… not paying attention to unwanted thoughts is the true solution. But can you do it?

First, you have to see the field in which the content takes place. There has to be space between your thoughts. When there is a gap, suddenly you notice the thought arising. There is more chance of your being able to choose, when there is space.

But the real bottom line, the true solution, the therapy of therapies is meditation. This is the practice where you learn how to get space between thoughts — where you notice a thought and can look at it with curiosity.

If you have no freedom over your thoughts, then you’re merely a physical puppet of mind-energy — a proverbial “leaf in the wind”, with no control over yourself or freedom at all. It’s like getting into your car, shutting your eyes tight and pressing your foot down on the accelerator…

No, we want to choose where the car goes and be able to steer, surely?

You’d have to be crazy…

The other component to my friend’s problem is belief. Of course, he believes his silly thoughts are true… it’s his own mind generating the fear, so if he didn’t believe his own mind he’d have to admit he was crazy.

There are two problems with this. Firstly, he is not the content of his mind and so secondly, he’s not crazy. His mind is working perfectly to the program. It’s the content, the program, the conditioning, that doesn’t serve him.

So, he is not the content. He would still be himself if he’d not had that trauma as a child. Identification with content is a big problem. We define ourselves by the content, by our experiences. But that’s not us.

Our beliefs, experiences and thoughts are often random programmings of life… interesting, often beautiful, sometimes ugly but they’re not us. They define our personality but that’s not us either. “Persona” is Greek for “mask” did you know?

The belief part has to be dislodged as much as possible by reason. In my friend’s case, explaining to him at length why his fear is irrational opens the door to him letting it go and being motivated to do the not-work of distraction — not paying attention.

If he still truly believed his fear was valid, he would never do what’s required because he would still believe the fear served him. Once the understanding is there — that the fear, or the habit of thought does NOT truly serve your best interests, you’re free to try to get rid of it.

I am the background

There is the thought.

The thought has no power unless I give it more attention.

Unless you’ve ever tried to meditate, you won’t understand how little power you have over thoughts that happen to you.

When I first started meditating over 20 years ago, the very first morning, I had 30 minutes meditation planned — I started off just fine… then 20 minutes later I remembered I was supposed to be meditating!

We reap what we sow and thoughts are seeds. If you’re not choosing what you sow, you won’t be reaping what you want.

I can’t meditate… it makes it worse!

My friend won’t do it. He won’t do the not-work. He admits he’s lazy but there’s more to it. When he’s having a few good days there’s no motivation. When hell descends on him he’s highly motivated but often in a state of high anxiety.

By the time the thoughts and feelings have escalated into anxiety it’s virtually impossible to rein it in. You have to nip unwanted thoughts in the bud. Spot them arising and withdraw attention before they trigger big emotions and fears.

By the way, if it’s gone pear-shaped and anxiety takes over, the best thing to do is exercise. You’ve got no chance of calming down when you’re pumped with adrenalin.

Also, when he tries to meditate, he has to face his inner demons close up through what feels like a big big magnifying glass and that feels scary at first. The solution to that is to start with relaxation techniques — get out of “fight or flight” and into “the relaxation response”.

So anyway, I can’t convince him and he’s chosen to attempt to just try and not pay attention. This is the slow route as I said, because it’s difficult to see the process with a thousand thoughts, sensory input and internal triggers going on.

You can’t fight the darkness

Meditation teaches you that attention is where the power is. You cannot try to suppress or fight any thought or feeling. That’s just more attention!

The solution is to notice it, let it be, let it go and choose a different focus.

Put your attention onto something else. As difficult as it is to ignore the fair ground stall holder, that’s what’s required. If you go up to him and scream and shout for him to go away, things are likely to get even nastier :-)

At first it takes every ounce of inner strength to hold your attention onto something else, to ignore the unwanted thought. But as you persist, it gets easier and easier until eventually, the thought has no more power over you.

Ignore thoughts you don’t want and hold onto thoughts you do want. That is power! It’s the power to say yes or no. And the same applies to feelings, which are emotional reflections of thoughts.

“I just wanted to say that since I read this article I have had no issues at all. What you wrote cured me and I am totally amazed by it. I am so impressed with the results, I feel totally different and peaceful.

I have seen so many health professionals over my problems, but none has ever come close to the advice that you give. Thanks Mike you have honestly changed my life.”— John Woods, Australia

“For the last week I’ve been practicing indifference towards unwanted thoughts + quick and intense shifting of attention to anything else.

When I started doing it, I got relief in few minutes as the quality of fear associated with these recurring thoughts was gone. Within hours I found calmness and peace growing within me.

It took an initial 3-4 days to have full grasp over the method and develop some more understanding. And now my thoughts have become very much reduced in frequency, and they have lost their power and don’t trouble me anymore. And it’s all because of one technique only.

I am sharing my experiences with other people having O.C.D. on internet and telling them about your website and trying to help them as I got it when I needed it the most. Sir, you have changed my life. and all that I can say is THANK YOU.”— Shivesh, India

…and that folks, is how you get rid of unwanted thoughts. 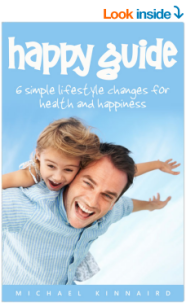 Michael Kinnaird is the author of Happy Guide, the result of a 20 year exploration into what works for health and happiness.

It only takes an hour to read and it’ll show you both what to change and how to change.

Read Chapter 1 “The Happiness Secret”
Or get the paperback…

696 thoughts on “How to get rid of unwanted thoughts”